Restaurant employment levels rose in October, albeit at a much slower pace than during the initial rebound coming out of the spring lockdowns. As a result of the recent slowdown, restaurant staffing levels remain 2.1 million jobs below pre-coronavirus readings.

On the state level, employment trends were generally positive in October, according to preliminary data from the Bureau of Labor Statistics. Thirty-six states and the District of Columbia added restaurant jobs between September and October, while only 13 states experienced job losses in the restaurant industry. Vermont’s restaurant employment level remained essentially unchanged in October. 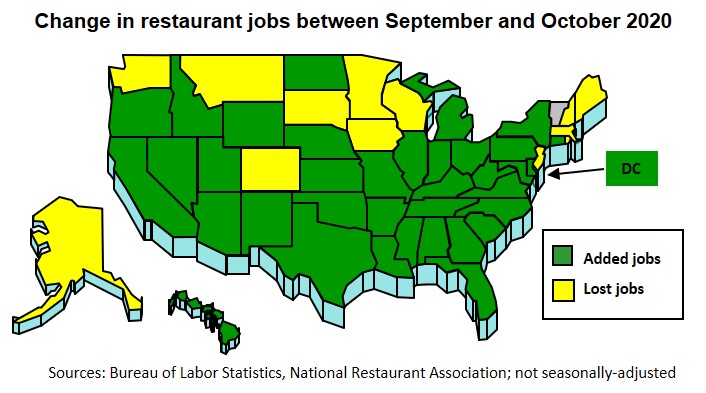 Although a majority of states added restaurant jobs in October, most were still well below their pre-pandemic employment levels. Overall, restaurant employment in 46 states and the District of Columbia remained below February’s reading. Hawaii (-41%), Vermont (-38%) and the District of Columbia (-31%) have the largest deficits from their pre-coronavirus staffing levels.

Only four states – Idaho, Mississippi, Indiana and Oklahoma – had more eating and drinking place jobs in October than they did in February. 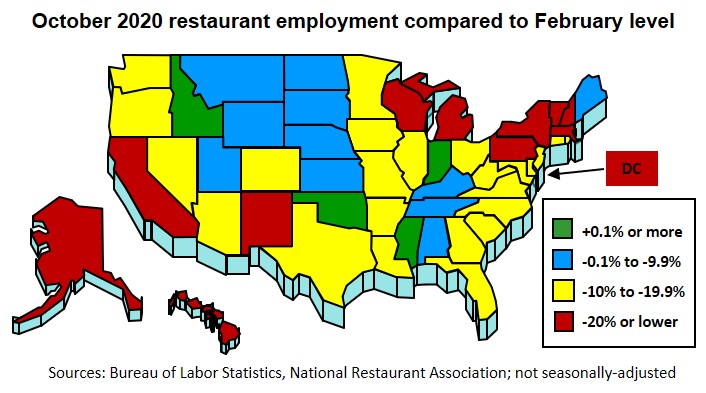 [It’s important to note that the BLS monthly employment reports count jobs during the payroll period that includes the 12th of each month. Changes in restaurant staffing levels – both negative and positive – have occurred rapidly during the coronavirus pandemic, as restaurants quickly adjust their operating status in response to evolving regulatory and economic conditions. As a result, significant changes likely occurred during the weeks between each measurement period, and the monthly data may not fully capture the total job losses experienced during the coronavirus lockdowns. Still, the figures are a useful indication of the extent to which restaurant employment is recovering in each state.]