The rebuilding of the restaurant workforce continued in July, as robust consumer demand bolstered the industry’s need for employees. In total during the first seven months of 2021, eating and drinking places* added a net 1.3 million jobs. That brought the sector within 1 million jobs of returning to its pre-pandemic employment level of 12.3 million.

Only 6 states – Idaho, South Dakota, Montana, Wyoming, Oklahoma and Arizona – had higher restaurant employment levels in July 2021 than they did in July 2019. 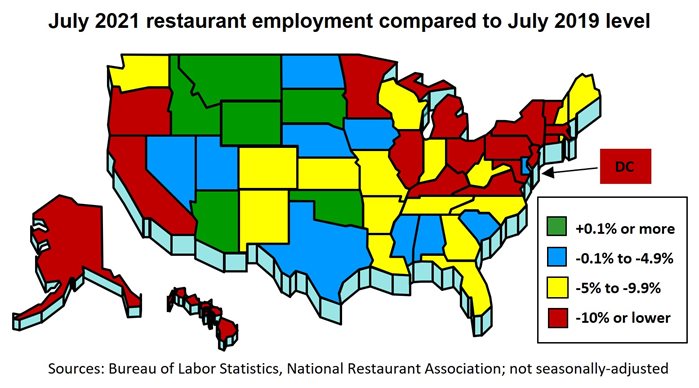 [Note: The BLS monthly employment dataset measures jobs during the payroll period that includes the 12th of each month. Changes in restaurant staffing levels – both negative and positive – have occurred rapidly during the coronavirus pandemic, as restaurants quickly adjust their operating status in response to evolving regulatory and economic conditions. As a result, significant changes likely occurred during the weeks between each measurement period, and the monthly data may not fully capture the total job losses experienced during the coronavirus lockdowns. Still, the figures are a useful indication of the extent to which restaurant employment is recovering in each state.]