Over the span of the last two months, the one-word description of the 2021 economic forecast evolved from ‘healthy’ to ‘spectacular.’ The combination of accelerated vaccine deployment and additional fiscal stimulus significantly enhanced the growth prospects for the economy in 2021.

Even though the economy is projected to grow at a rate not seen in nearly four decades, it is not yet time to sound the all-clear. The damage inflicted on the labor market was so severe that a full employment recovery isn’t expected until 2022.

Still, the steady reopening of the economy will unleash consumers that have both the desire and wherewithal to jump-start their spending. This will particularly benefit hard-hit sectors like restaurants and other leisure activities, which were devastated over the last 12 months.

For their part, consumers are generally optimistic about the economy in the months ahead. Fifty-five percent of adults say they expect economic conditions will get better during the next six months. Only 22% think conditions will worsen.

Millennials, Northeast residents, urban residents and individuals in higher-income households are the most bullish about improving economic conditions in the coming months. 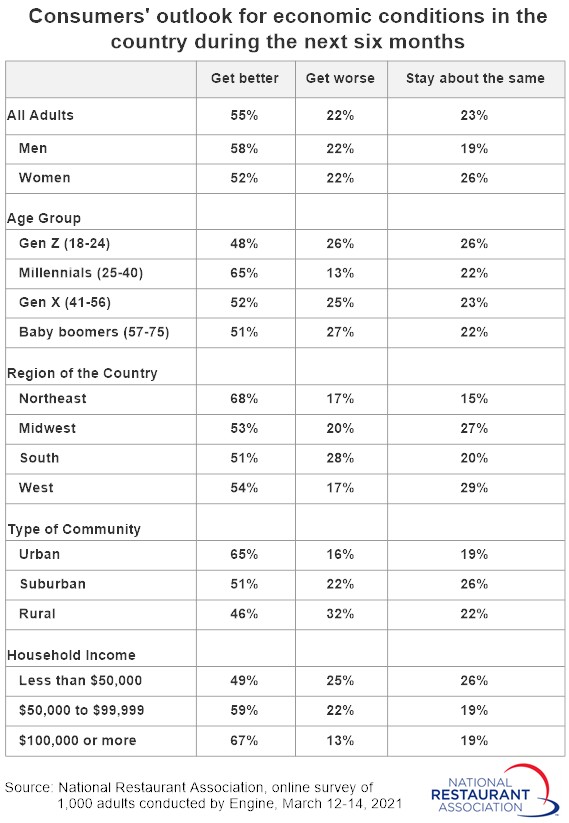 While the economic downturn caused by the pandemic was brief in the historical context of recessions, it was easily the largest contraction in economic activity on record. Real gross domestic product (GDP) – the value of goods and services produced in the United States – plunged at a 31.4% annualized rate in the second quarter of 2020. This followed a 5.0% drop in the first quarter, according to data from the Bureau of Economic Analysis (BEA).

Even though the economy rebounded to grow at a 33.4% annualized rate in the third quarter of 2020 – by far the largest quarterly increase on record – it wasn’t enough to recover the losses from the previous two quarters. As a result, real GDP fell 3.5% in 2020 – the largest annual decline in the post-World War II era.

Bolstered by the additional fiscal stimulus, the economy is projected to expand at a steady pace in 2021. The National Restaurant Association expects real GDP to grow at annualized rates of at least 5% during each quarter of 2021 – the first such occurrence during a calendar year since 1983. By the second quarter of 2021, GDP is projected to surpass its pre-pandemic levels.

Overall, the projected 6% increase in 2021 would represent the strongest annual real GDP growth since 1984 (7.2%), and only the second year since 1966 with economic growth of at least 6%.

Employment will not surpass pre-pandemic levels until 2022

Prior to the coronavirus pandemic, the U.S. economy was in the midst of its longest expansion on record. More than 22.8 million jobs were added during the 10-year period ending February 2020, and the unemployment rate hovered near half century lows, according to data from the Bureau of Labor Statistics (BLS).

When the economy shed nearly 22.4 million jobs in March and April, it wiped out nearly all of the gains of the previous 10 years. Although 12.3 million jobs were added back to payrolls during the final 8 months of 2020, the economy still finished the year more than 10 million jobs below pre-pandemic levels.

On an average annual basis in 2020, total U.S. employment plunged 5.8% from 2019 levels. That represented the largest annual employment loss on record, dating back to the beginning of the BLS data series in 1939. The second largest annual decline was during the financial crisis in 2009, when payrolls shrunk by 4.3%.

The labor market will continue to recover over the course of 2021, with job growth picking up speed as the availability and distribution of the vaccine becomes more widespread. The National Restaurant Association expects the national economy to add a net 6 million jobs between December 2020 and December 2021, with 60% of those gains coming in the second half of the year.

Disposable personal income is an important driver of restaurant sales, as many consumers make meal decisions based on their available cash on hand. Fiscal stimulus provided significant support to personal income in 2020, and this trend is continuing unabated in 2021.

Real disposable personal income increased at a 48.6% annualized rate between the first and second quarters of 2020, as the CARES Act contained both direct payments to households and enhanced unemployment benefits for the millions of people that were laid off or furloughed in the initial months of the pandemic. As a result, real disposable personal income rose nearly 6% in 2020, even as the economy finished the year nearly 10 million jobs below pre-pandemic levels.

On top of the $600 direct payments that were included in the economic relief package that was passed in December 2020, the American Rescue Plan included additional income-supporting stimulus in the form of $1,400 direct payments and the extension into September of a $300 weekly supplement to unemployment benefits.

As a result of these measures, real disposable personal income is projected to rise 3.0% over 2020’s elevated income levels, which will be an additional catalyst for stronger consumer spending in 2021. Driven by robust income gains, inflated savings and the reopening of the service sector, growth in real personal consumption expenditures is expected to top 6% for the first time in a half-century.