The National Restaurant Association Educational Foundation’s Advance Culinary Training Program, a five-day program held each quarter, gives members of the Armed Forces an opportunity to improve and enhance their culinary skills and develop competencies that not only help them while in military service, but also prepare them for successful civilian careers.

Headed by chefs from the Culinary Institute of America, the classwork exposes students to the CIA’s ProChef Level 1 culinary competencies.

Three ACTP participants shared their experiences about the program and how it’s helped them advance their goals and careers.

Auri Acevedo, U.S. Marines
Acevedo, a junior Marine when she attended the program, said the ACTP was used as an incentive to get Marines to compete in foodservice competitions on the base, like Chef of the Quarter and Chef of the Year. She competed, but didn’t win. However, the person who did, couldn’t attend ACTP when it was held so Acevedo went instead.

“At ACTP, we learned basic techniques, like professional culinary-arts knife cuts, and how to make mother sauces, but most important, we learned how to be leaders. The one thing most people don’t realize is foodservice is more than just cooking,” she said. “This program teaches skills—leadership, time management, creativity, the ability to multitask. Those aren’t just kitchen skills, but life skills, and that’s what makes this program exceptional.”

Acevedo, now a staff sergeant at Marine Corps Air Station in Beaufort, S.C., said being a part of ACTP helped her find her regain her passion for foodservice, become a better leader, and a better chef. “I look forward to using the skills I learned at my own restaurant one day.” 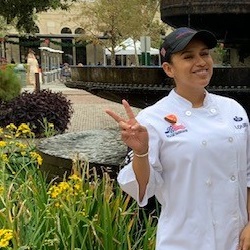 Mayra Loury, U.S. Air Force
Loury first heard about ACTP after arriving at the U.S. Air Force Services Center in San Antonio last year. She’d applied for a job there, and was lucky enough to attend when one of the scheduled participants was unable to go.

“Learning the core basics from the CIA-chef’s training helped me get selected to work on the team that develops the Air Force’s foodservice menu,” she said. “Now I’m responsible for helping to update the menu each month, adding in healthy options that make sense.”

The program also helped Loury, whose enlistment is up in four years, understand the power of aromatics and sauces—how they can enhance a regular dish and take it to the next level, she added.

“The skills I’ve learned have positioned me as a good candidate for jobs in multiple foodservice sectors,” she said. “I can apply to be a manager, director, or even a recipe creator. The possibilities are endless.”

Mark Denton, U.S. Coast Guard culinary instructor
In 2020, the Coast Guard was given two spots to attend the ACTP program. Denton said his commander, recognizing his skill as an instructor, asked him if he’d like to attend the course, and he immediately agreed to go. He’d never attended an “accredited culinary school,” just the Coast Guard’s 13-week crash course, which teaches basic skills. “You learn the fundamentals,” he said. “It prepares someone who’s never used a spatula before to go into the fleet and cook meals using recipes.”

Denton said he’s always had a pretty high culinary IQ, but didn’t think he had what it took to perform at the same level or higher as someone with a culinary degree. At the weeklong training at the CIA’s San Antonio campus, he realized everything he’s learned and teaches in the Guard is what the “civilian” side teaches. It was a confidence booster.

His favorite part of the training was participating in the practical-aspect timed events, such as plating, garnishing, and adding personal touches to assigned recipes.

“The chef told us recipes are just a guide, and I really appreciated that because being creative is my favorite part of being a military chef,” he said. “At the end of that week, I left knowing that what I teach and what makes me the chef I am is good enough, and that my dreams of opening a restaurant or catering business someday could become a reality.”